2022 turned out to be a turbulent year for the economy. To start, the FED had announced that they would be rolling back their pandemic measures, in order to combat high inflation. What many did not expect was for Russia to invade Ukraine, which put pressure on world markets, including oil/gas and agriculture. Russia is a major exporter in both industries, especially in minerals used to make fertilizer. Ukraine produces high percentages of the world’s grain, iron, and steel, among other exports. Between interruptions to trade, political sanctions on Russia, and investor fears, this had a major effect on a world economy already reeling from the pandemic. 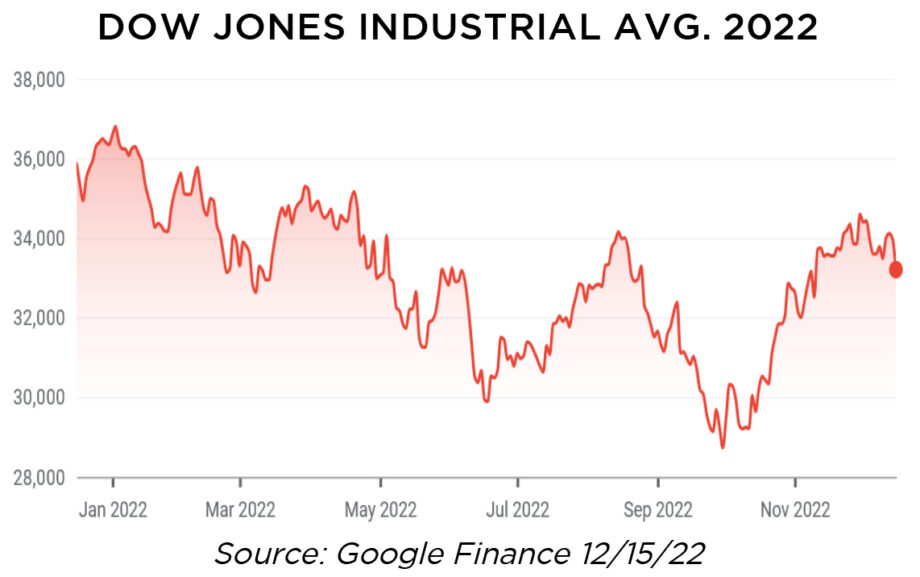 The conflict in Europe, among other factors, threw the U.S. economy into fresh turmoil. Stocks tumbled throughout the year. Although they bounced back from their lowest point in September, they are currently on track for their biggest losses since 2008. Inflation skyrocketed to rates not seen in the U.S. since the 1980s! This forced the FED to take an even more aggressive stance against inflation.

For real estate, it meant that mortgage interest rates literally doubled this year, from 3.25% in January to around 6.5% today. The sharp rise in mortgage rates, while dramatic, just returned them to levels closer to the 30-year average. However, buyers really stepped on the brakes as a result! In fact, this year marked the biggest decline in new mortgage applications on record. 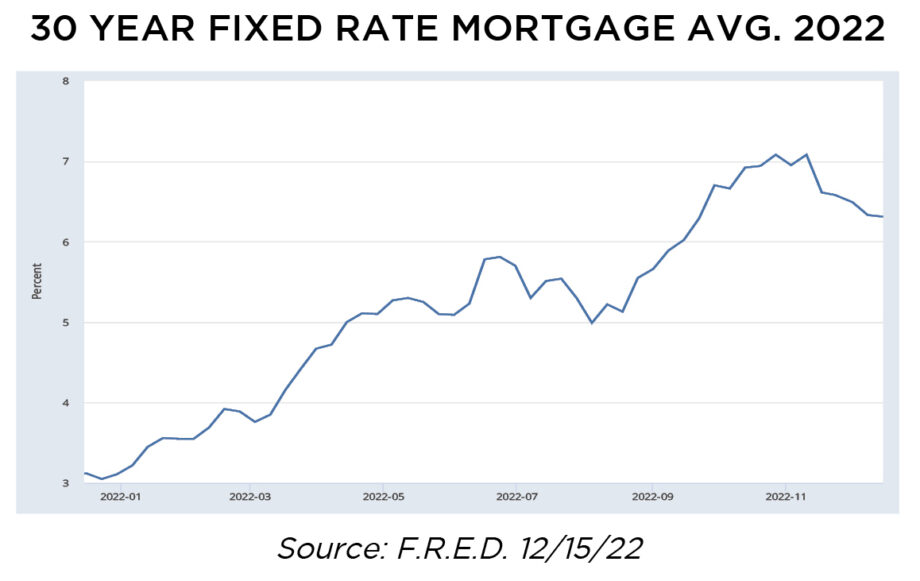 So, what comes next?

Although people think we’re already in a recession based on the shorthand definition: two consecutive quarters of negative GDP growth, it has still not been called that yet by the entity that declares it: The National Bureau of Economic Research. They factor in a broader range of economic factors to declare a recession. However, a growing number of experts feel like a true recession is likely to begin in 2023. Exactly when that will happen is anyone’s guess, but the popular opinion has shifted from Q1 to either Q2 or Q3. What that means for us is that slow real estate sales are likely to persist for at least a few months, and possibly longer into the summer than previously expected. Based on current trends, our in-house experts now predict that home prices will see +/- 3% growth over the course of the year. Modest price declines are likely in certain neighborhoods that are not as resilient to recessions (we have a specialized map for that if you are interested – just let me know). It’s still a seller’s market now, but we may gradually shift closer to a balanced market the longer a recession drags on.

Although world and national trends impact what’s happening locally, let’s take a look at the real estate stats for Metro Denver. Looking at the market snapshot for November 2022, inventory was up almost 180% from last November! That is a massive increase for one year. 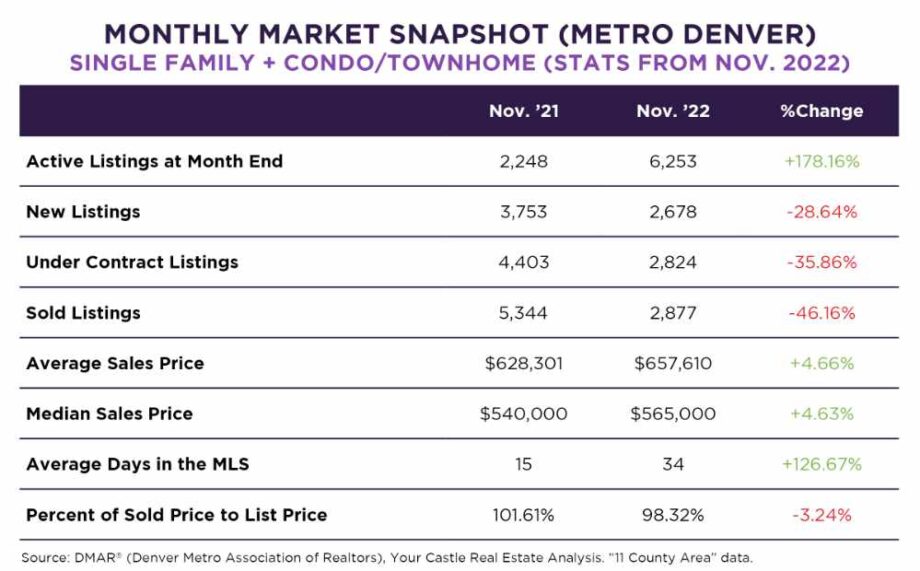 However, you can see based on the decrease in new listings, it’s not because more homes are coming to the market, but rather, homes are taking more than twice as long to sell — 34 days on average. Home sales were down 46% in the same period, largely due to the aforementioned mortgage rate increases. The good news for homeowners is that home prices continued to rise despite the economy at large, around 4.6% on average, year-over-year. Real estate continues to be a reliable hedge against inflation, unlike many other investments.

If you’re looking to sell a home this winter, it’s important to note that although we’re still in a seller’s market, buyer expectations are shifting. Over the past couple of years sellers may not have had to try as hard to sell their homes quickly and at a premium — that’s not necessarily the case today. Now that rates are between 6-7%, many buyers will have higher monthly payments. They also have more options to choose from. To sell faster and stay competitive, you may have to improve the curb appeal and make other repairs. You should price your house accurately and not try to inflate the value, so you don’t need a price reduction. Lastly, be sure to make showings as easy as possible. If a buyer has a hard time getting a showing or the house doesn’t show well, they may simply move on.

This Winter Could Be a Great Opportunity

Now that inventory is back up to levels not seen in years, you might have a bit more room to negotiate with sellers. Since the pandemic, some buyers had started to waive their inspections, or not ask for any concessions. Now that inventory has gone up and homes are taking longer to sell, you might have a great chance to talk with sellers who have had their homes on the market for 20, 30, or maybe even 45 days, and have more room to negotiate the price and repairs. Plus, 30-year mortgage rates are currently down from their recent peak in Oct./Nov., so your monthly payments might be less than last month. Spring will likely be more competitive due to real estate seasonality, so this might be a great chance to buy before things really ramp up again.

*We use reasonable efforts to include accurate and up-to-date information. The real estate market changes often. We make no guarantees of future real estate performance and assume no liability for any errors of omission in the content.

As always, feel free to contact us if you have questions or are interested in making a move.